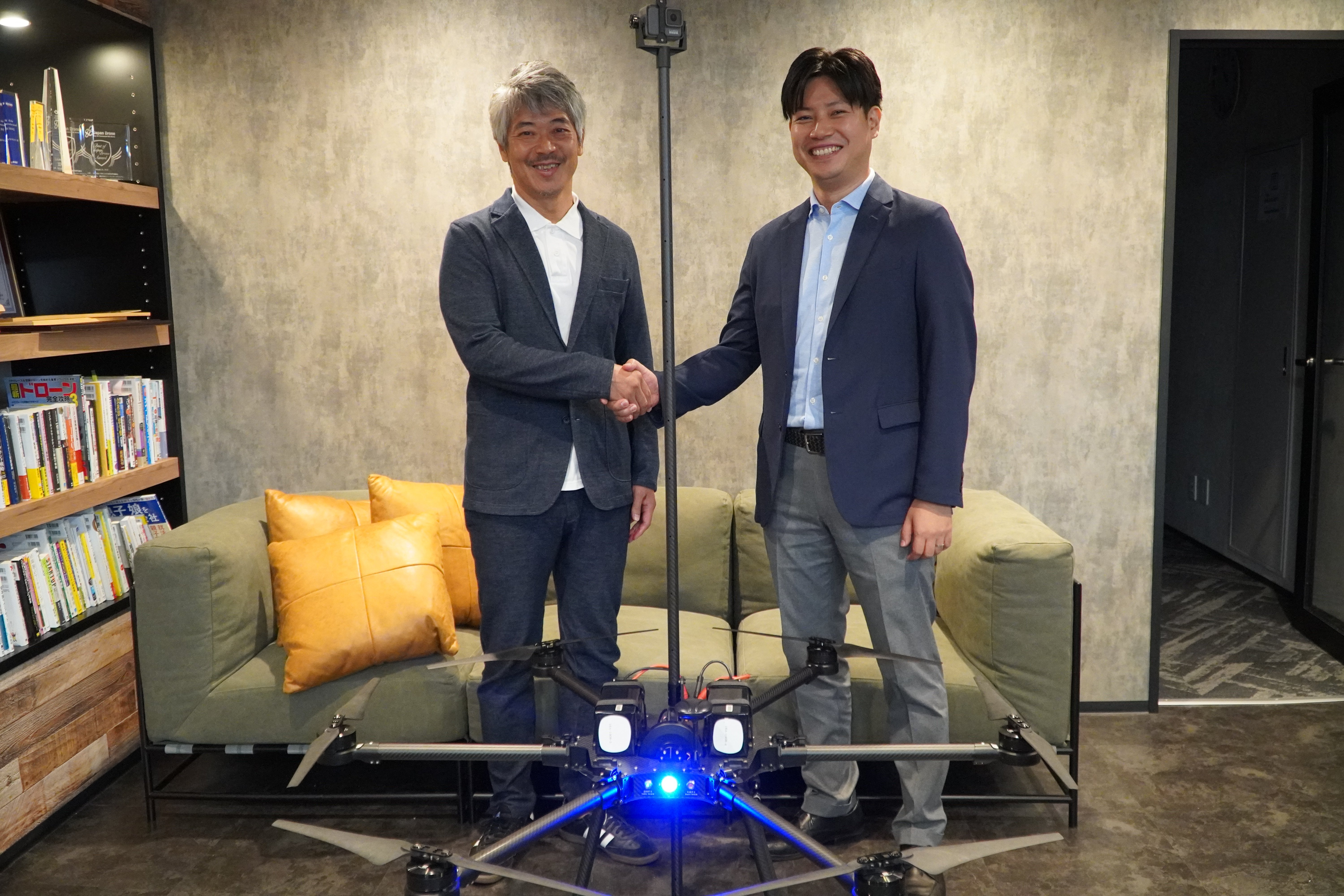 Details of the Business Partnership

SENSYN ROBOTICS and Aeronext have now entered into a business partnership agreement. The aim of this agreement is to form a strategic business partnership for customer and application development to turn industrial drones into the next-generation concept of flying robots by making full use of each other’s expertise and technologies. We will jointly work on planning, research, development, maintenance, design and operation.

Background to the Partnership

The social issues facing Japan include a reduction in the workforce and rising labor costs due to the decreasing birthrate and aging population. They also include the need to secure the safety of workers in dangerous areas. It is expected that industrial drones can be used in distribution, agriculture, security, facility inspection, disaster countermeasure and various other fields that are facing these challenges. Meanwhile, drones are being used to capture photographs and videos – in other words, they are being used only for applications as the eyes of humans. This means it is only realistic to use drones under limited conditions (e.g., short periods of time, short distances and when there are good climatic conditions).

With current industrial drones playing a role in the area of flying cameras, what is required of next-generation industrial drones is that they be flying robots that use their functions to perform multiple tasks of some kind on behalf of humans. Under this belief, both SENSYN ROBOTICS and Aeronext agree that it will be possible to realize the next-generation concept of flying robots by combining the SENSYN FLIGHT CORE automatic navigation platform and industrial drones equipped with the 4D GRAVITY® center of gravity control technology. This has led to this partnership.

SENSYN ROBOTICS is developing various drone solutions to solve problems in response to the social issues facing Japan with a focus on the SENSYN FLIGHT CORE automatic navigation platform. These problems include a lack of operators (manpower) to operate the drones and check the captured images as well as the man-hours involved in developing and securing those operators. 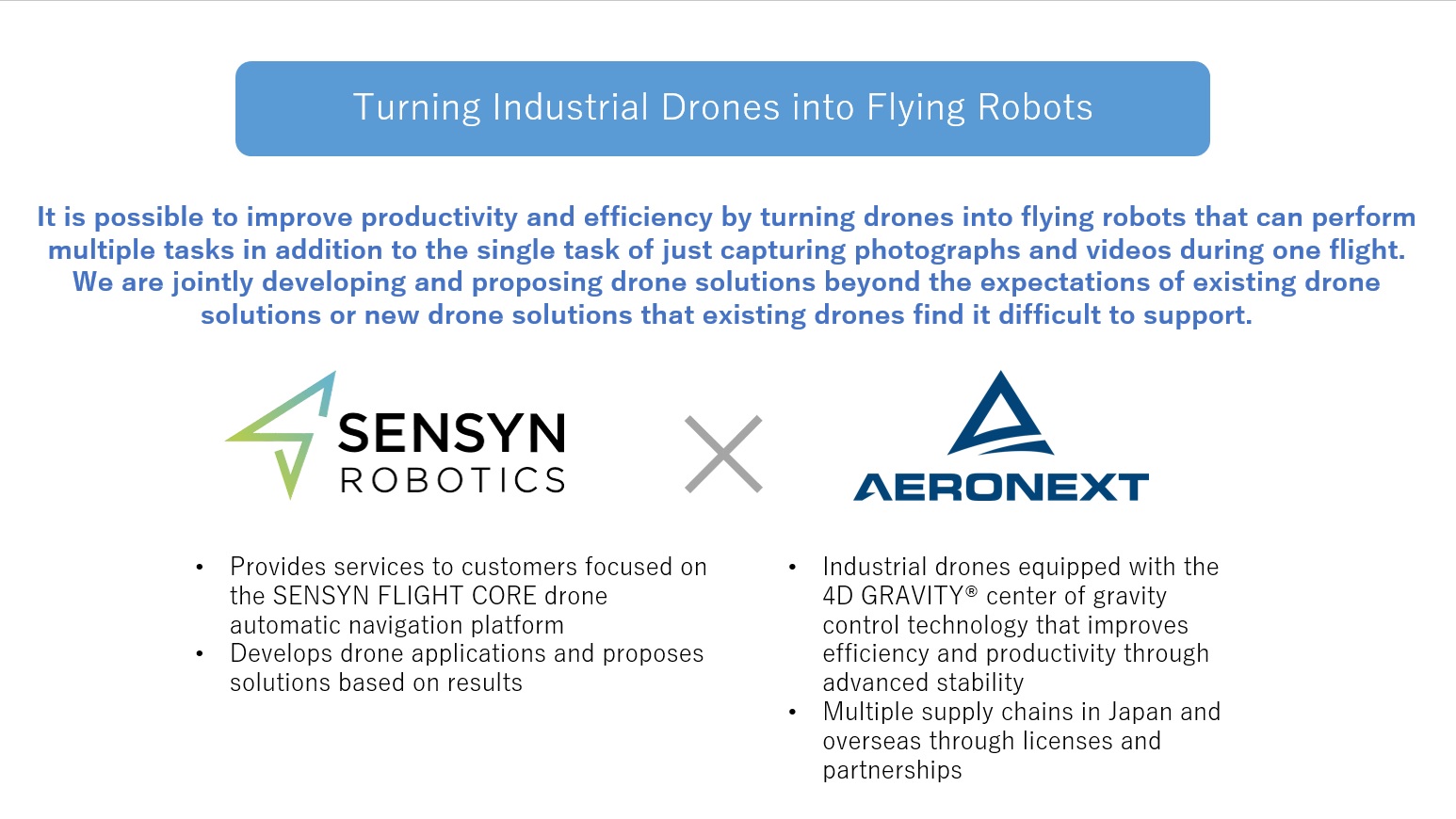 We will utilize drones equipped with 4D GRAVITY® in complex applications that cannot be handled by existing industrial drones in the social infrastructure maintenance and inspection field over wide areas including power lines, steel towers and dams where the strengths of SENSYN ROBOTICS lie. This will allow us to make proposals and carry out development according to the specific demands of the customers possessed by SENSYN ROBOTICS.

SENSYN ROBOTICS and Aeronext will combine and make full use of each other’s technologies and customer/application development expertise. With this, we will join forces to turn industrial drones into the next-generation concept of flying robots. This will help to solve the challenges of our customers as well as social challenges. It will also contribute to the realization of a society with drones.

SENSYN FLIGHT CORE is a comprehensive platform that easily realizes the automation of operations by drones even without special knowledge and skills. It possesses extensive functions indispensable in the automation of operations (e.g., centralized management of flight plan and performance data, support for simultaneous flights with multiple drones, compatibility with the drones of various manufacturers and connection to UTM*) in addition to being able to setup flights simply.
*UTM: This is the abbreviation for unmanned aerial system traffic management.

The 4D GRAVITY® center of gravity control technology of airframes is the general term for a series of technologies that optimize the position of the center of gravity according to a drone’s flight attitude and operation. It is technology essential for next-generation drones that contributes to high mobility and improved fuel consumption in response to severe weather conditions.

Aeronext’s 4D GRAVITY® center of gravity control technology was developed by fundamentally reviewing the structure of the airframes in UAVs. It greatly expands the application range of industrial drones with that stability and reliability that could not be achieved in conventional drones. The firm has already announced multiple types of prototypes in the Next series of industrial drones equipped with 4D GRAVITY®. These include Next VRTM 360° VR capture drones, Next DELIVERY® horizontal transport drones, Next INDUSTRY next-generation industrial drones and Next VTOL® pinpoint landing compatible VTOL delivery drones. Moreover, the company has set up a structure in which it is possible to supply industrial drones equipped with 4D GRAVITY® in multiple routes by partnering with the major agricultural machinery manufacturer KOBASHI INDUSTRIES, VAIO and the largest Chinese industrial drone manufacturer of MMC.

Aeronext is a drone architecture research institute to realize the ideal situation of unmanned aerial vehicle (UAV) and multi-copter airframes. The company is looking to turn its unique 4D GRAVITY® center of gravity control technology that improves stability and reliability into the standard technology of industrial drones. To that end, it is building a strong patent portfolio and deploying its 4D GRAVITY® technology licensing business on a global basis.

DaaS: This is the abbreviation for drone as a service. It is possible for customers to use the drone solutions of SENSYN Robotics as services without the need to buy drones. The advantages to this include a reduction in the cost of introducing/operating drones and a release from maintenance/upgrade work.