SENSYN ROBOTICS holds training for "drone operation advisors" certified by the Fire and Disaster Management Agency of the Ministry of Internal Affairs and Communications for firefighters nationwide.

SENSYN ROBOTICS, Inc. (Head Office: Shibuya-ku, Tokyo / President: Takuya Kitamura; hereinafter “SENSYN ROBOTICS”), a company which is aiming to fully automate operations with drones focused on the areas of facility inspections, disaster countermeasures and security, has participated as an instructor in the training of "drone operation advisors," a training program for drone instructors conducted by the Fire and Disaster Management Agency of the Ministry of Internal Affairs and Communications, and conducted the training at the Fukushima Robot Test Field for three days from Wednesday, January 29 to Friday, January 31, 2020. 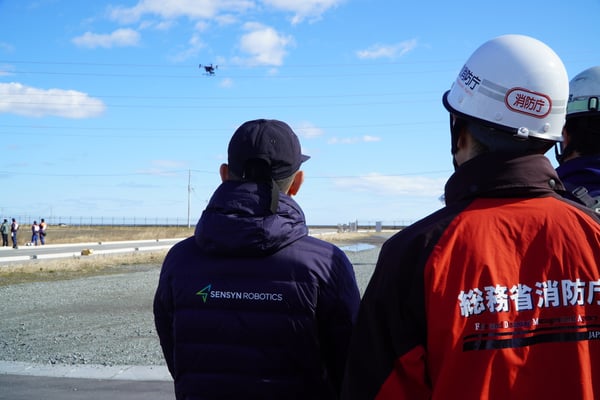 Drones are expected to be used in areas where helicopters cannot approach. In the case of a large fire, a thermal imaging camera can be mounted and flown to help identify the source of the fire and assess the damage. It is also useful for searching for missing persons at the site of a landslide or other disaster.

The Fire and Disaster Management Agency of the Ministry of Internal Affairs and Communications will start training for firefighters nationwide in the second half of fiscal 2019 and certify the participants as "drone operation advisors. 135 people in total will be trained by fiscal 2023 and will be sent as instructors to fire departments that have not introduced drones.

A firefighter who participated in the drill said, "I was able to practice safety and hone my skills. I hope to apply this to my future firefighting duties. I would like to take the skills I learned during the three-day training and spread them throughout the prefecture. I was able to learn a lot about the wonderfulness of drones and the difficulty of safety considerations. When I return to headquarters, I hope to pass on the skills I've learned to as many employees as possible. He said.

The 15 firefighters who completed this training were certified as "Drone Operation Advisors".

According to the Fire and Disaster Management Agency of the Ministry of Internal Affairs and Communications, 201 of the 726 total fire departments have unmanned aerial vehicles, but only 139 of them have utilized them. *(As of June of the first year of the ordinance)

In the future, "Drone Operation Advisors" will be dispatched to various locations to act as advisors for effective and efficient information gathering in the event of a disaster.

SENSYN ROBOTICS will continue to contribute to disaster prevention and mitigation through the use of drones and other robotics technologies.

*Quoted from the Ministry of Internal Affairs and Communications Fire and Disaster Management Agency, "Firefighting Movements in 2020"
https://www.fdma.go.jp/publication/ugoki/items/rei_0202_11.pdf