SENSYN ROBOTICS, Inc., in collaboration with Fujita Corporation, has developed an "automatic patrol drone system for tunnel tunnels" that enables stable autonomous drone flight in indoor and other environments where GNSS*1 cannot be received, while simultaneously automating the collection of information on construction progress.

The technology was tested in the "Hanoura Tunnel Construction of the Cross-Island Highway in 2022-4*2 (Komatsushima City, Tokushima Prefecture)," which is currently under construction. The system was confirmed to be capable of conducting patrol inspections linked to BIM/CIM in the tunnel pit in a VR (virtual reality) space automatically generated from images taken by the onboard 360-degree camera.

This technology uses a drone developed by SENSYN ROBOTICS that uses LiDAR*3 for flight control, enabling safe and stable autonomous flight even in non-GNSS environments and dark tunnels. In addition, by linking the drone with the "OpenSpace "*4 on-site monitoring system that can generate VR space using image information acquired by the drone's 360-degree camera, each stage of construction site work can be comprehensively recorded, and construction management information can be centralized in conjunction with BIM/CIM. This enables rapid information sharing and analysis among related parties, leading to more efficient and advanced patrol and inspection operations.
In the future, we plan to further advance autonomous flight, expand to non-GNSS environments other than tunnels, and promote the use of point cloud data obtained by LiDAR for quality and form control, thereby continuing technological development to contribute to the development of i-Construction.

*3 Light Detection And Ranging: Technology to measure the distance and direction of objects based on the irradiation and reflection time of laser light.
*4 360-degree on-site monitoring system provided by OpenSpace (Open Space Labs, Inc.)

Until now, the use of drones at construction sites has been limited mainly to outdoor use because they cannot fly automatically or autonomously along predetermined routes without GNSS, and advanced operating techniques are required to pilot the drones. In addition, efficient inspection technology was required for tunnel construction where there are many obstacles such as machinery and equipment in dark areas and large heavy machinery is moving, and the time available for patrolling is limited.

Features and benefits of this technology 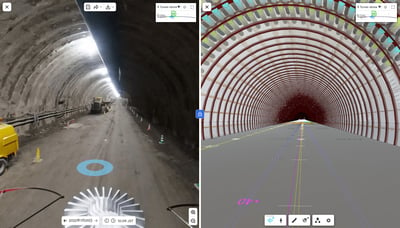 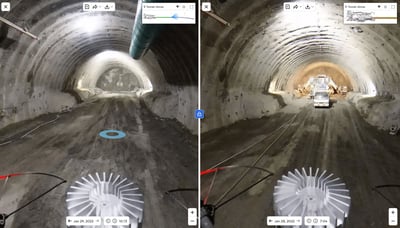 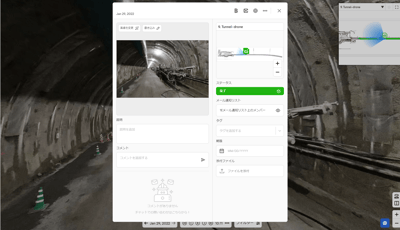