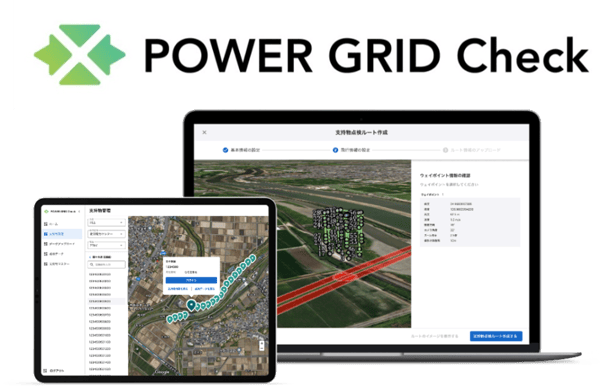 "POWER GRID Check" is a power transmission facility inspection application that utilizes drones in the maintenance of overhead power transmission facilities.
It is characterized by its ability to automatically inspect steel towers (supports and girders) and transmission lines (overhead ground lines and power lines) in a batch. The drone can easily perform power line inspections even by workers without special knowledge of drones, by ensuring a safe separation distance between the drone and the equipment and by performing uniform data acquisition through automatic navigation.
Since the system uses common drones available on the market, it can be operated independent of hardware.

In the maintenance of power transmission facilities, workers regularly ascend towers to inspect and check the integrity of the facilities, but this requires a heavy workload for the workers to ascend to high places with tools, as well as manpower and time.
In addition, when drones are used for manual flight, there are risks of equipment damage and public safety due to mishandling, and the operation is dependent on the skill of the drone operator, which has prevented the use of drones in some operations and at some business sites.
By utilizing "POWER GRID Check," it will be possible to establish a leveled skill set through automated navigation, making operations independent of drone pilot skill. In addition, since no-fly areas are automatically created based on equipment information, the risk of equipment damage due to malfunction can be eliminated.

By replacing the number of workers that used to be spent on tower inspections with inspections using "POWER GRID Check," the number of inspectors can be reduced and the daily progress of the number of units inspected can be increased, which is expected to have the effect of reducing costs.
POWER GRID Check" is based on our "SENSYN CORE" and incorporates technology developed through joint research withChubu Electric Power Grid Co.,Inc.
We will continue to regularly upgrade the version of the system and promote its development to expand the scope of application for facilities and further enhance inspection operations with advanced technology.
In the near future, we will add a data management function, aiming at data sharing and further streamlining of analysis operations.

The logo of "POWER GRID Check" is based on the motif of a view of the top of a steel tower from the sky, which expresses SENSIN Robotics' mission of "evolving the 'natural' in society through the power of robotics. Conventional tower inspections and observations from the ground were done from below, but inspections using drones are done from above. In this way, the replacement of inspections in maintenance work with inspections utilizing drones radically improves the norm for inspection work and demonstrates a willingness to make an irreversible choice.