SENSYN ROBOTICS is pleased to announce the launch of SENSYN Explorer, a narrow area inspection service.

Against the backdrop of a declining birthrate, aging population, and aging infrastructure, the need for the use of drones in the inspection field is increasing year by year. In particular, small inspection drones are in high demand for confined spaces such as inside chimneys, tanks, pipes, and pipelines where human access is difficult, and the realization of a solution has been an urgent issue.

SENSYN Explorer is a service that takes an optimal approach to the inspection target, acquires images and videos, and outputs them according to the customer's needs. By selecting the right model for the right job, including our own devices, we can reduce the need for conventional scaffolding, eliminate the risk of accidents when working at heights, and greatly reduce the construction period and cost.

In terms of the utilization of the acquired data, it is possible to provide not only summary reports, but also outputs such as 3D models and orthoimages, and to manage and share the data in the cloud.

In order to provide this service, we have conducted demonstrations in the dark, high, and narrow spaces of several facilities, including oil plants and steel mills, to confirm its usefulness.

Linking captured still images and videos to images, drawings, and 3D models of the target facility and managing them in the cloud 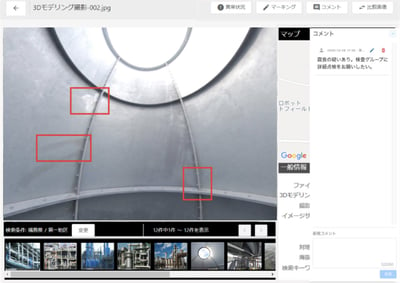 Support for functions necessary for inspection work, such as marking and commenting on images and sharing them

1. Alternative to visual inspection of high places such as chimneys and tanks.
Drastic cost reduction of scaffolding installation.

2. substitute for visual inspection of narrow, closed spaces such as pipes, ducts and vents
If it is a general duct (inner diameter 50cm), it can fly even if there is an obstacle in the way. Even if the duct extends vertically up and down, it can be photographed by flying.

We offers a full package of services, from planning and management to delivery of summary reports, as well as a plan to provide data on the spot after shooting.

We offers a full range of services to meet the needs of each inspection. We operate a multi-vendor system with a number of models, including some developed in-house. By realizing the best combination according to the customer's issues, we have made it possible to realize "inspection of narrow areas," which was not easily possible before.

In the future, we will utilize robots other than drones, and aim to realize inspections in a wide range of usage scenarios, such as patrolling indoor facilities.