By automating indoor drone flights at construction sites, it will be easier for construction managers to conduct safety patrols and site inspections from their own seats in the office or from remote locations. In addition to reducing the amount of time spent traveling to and from the construction site, the indoor photos can be effectively used for various meetings.

Normally, drones receive GPS signals when flying outdoors. To achieve SLAM, drones generally use a camera to recognize characteristic points to create a map for flight and estimate their own position while flying. In order to realize SLAM, a flight map is generally created by recognizing characteristic points using a camera, and the aircraft flies while estimating its own position. However, at construction sites, where the environment changes from day to day, it is difficult to set up landmarks in a timely manner, and the flight route cannot be visualized on a map, so the operator generally has to operate the system manually.

The newly developed indoor inspection solution uses "SENSYN CORE" to provide flight instructions for aircraft using Visual SLAM, and maps created from BIM and 3D models can be used for route design. The conversion of BIM data and the display of a 3D map enables the creation of visually clear routes, including heights. ACSL is also working on automatic flight routing based on BIM alone, without manual pre-map generation.

The aircraft uses ACSL's proprietary image processing technology to estimate its own position (Visual SLAM), enabling autonomous flight even in confined environments such as indoors or inside factories where GPS/GNSS data cannot be acquired. Autonomous flight is possible even in narrow environments such as indoors or in factories where GPS/GNSS data cannot be obtained. In addition, a 20-megapixel camera mounted on the gimbal can acquire high-resolution images.

In the demonstration test with Takenaka Corporation, Kanamoto, and Aktio flight paths were established and automatic flight was performed using "SENSYN CORE" in anticipation of collaboration with construction robot platforms.

In the demonstration test, the robot achieved an automatic flight from the first floor to the second floor, passed through a width of 2 meters, and flew safely even in a narrow environment with obstacles. Visual SLAM performance was also assured in a test that closely resembled the actual operating environment, including the effects of glass surfaces and ambient light.

Based on this demonstration test, we plan to work with Takenaka Corporation, Kanamoto, and Aktio to jointly develop functional issues for use in the field, with the aim of commercializing the system in the construction industry. 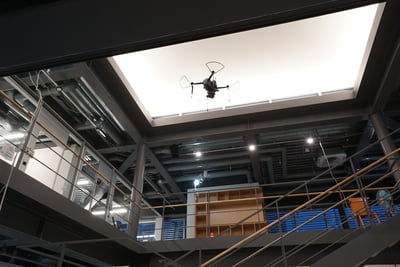 SENSYN ROBOTICS and ACSL will continue to promote remote and advanced patrols and safety management, and develop solutions that can contribute to solving the social issue of manpower shortages and ensuring worker safety.