SENSYN ROBOTICS, Inc. (head office: Shibuya-ku, Tokyo; President & CEO: Taishin Demura), the company known for providing commercial robotics solutions for businesses and local governments, will start offering a beta version of its new TOWER CHECK, a package for tower inspections incorporating the use of drones. The package contains a camera-equipped drone that is operated automatically to take photos of the steel tower to be inspected that produces photography data, based on which areas of rust and corrosion are detected automatically, leveraging AI for image recognition and analysis and to compile reports on the inspection data. This will be the first service offered in Japan to automate everything from drones flown on auto pilot to image recognition and analysis and the compilation of reports in a comprehensive one-stop manner to reduce manpower and costs and to boost efficiency in inspection work. 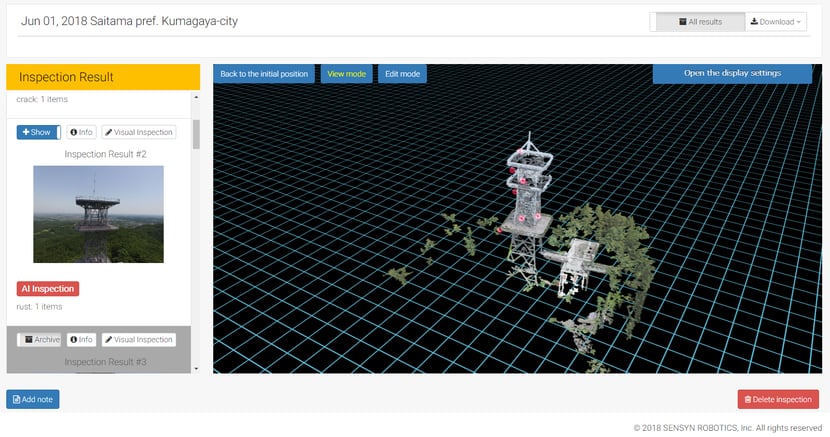 Background for Development of Services

Tower inspections have conventionally been performed based on visual inspections conducted by workers climbing up the structures, which had been weighed heavily by the corresponding work hours and manpower costs, as well as the constant risks of accidents of people falling. TOWER CHECK makes it possible to replace the human work by operating drones on auto pilot for primary and close visual inspections of towers. In addition to its automated operations, it automates everything from simple flight patterns to the compilation of reports as it aims to resolve challenges in all aspects—costs, work efficiency, and safety. According to Sensyn Robotics’ calculations, it is possible to expect up to an approximately 57 percent reduction in costs compared to conventional tower inspection methods.
Sensyn Robotics is considering promoting validation experiments and trial introductions of its beta version in order to initiate full-fledged deployments for telecommunications businesses and those who are engaged in the electric power industry.

Basic Features and Characteristics of the Service

TOWER CHECK uses a unique image analysis engine that incorporates an application of AI and deep learning that has been developed by Research Institute of Systems Planning, Inc./ISP (head office: Shibuya-ku, Tokyo, Representative Director: Hitoshi Kadowaki) to offer a highly accurate feature for detecting rust and corrosion. ISP’s unique technology enables deep learning methods using small volumes of study data, rather than large amounts which are usually required. Procedures may commence without waiting for data to be accumulated to improve the performance of abnormality detection in short cycles to match the accumulation of inspection data.

As an initial preparation, training will be conducted on automatic flight plans for towers, using “FLIGHT CORE”*1. Sensyn Robotics staff will offer support at the time of initial inspection, while the second time onward are to be conducted by the user.
*The application alone may also be supplied to companies that have their own drones.
*1. “FLIGHT CORE”, an automated platform for duties performed by drones.
A comprehensive platform that enables automation for the businesses of customers. Comprises three systems: A ground control system, a work performance control system, and a data linkage system, making it possible to automate work procedures using a drone without the need for specialized knowledge or skills.

Since our establishment in October 2015, we have been developing business solutions that combine robotics technology such as drones with advanced technology. In particular, by promoting automation and generalization, we are proposing new ways to solve business problems, including saving labor and enabling unattended operations. In this way, in addition to helping tackle the social issues facing Japan, we plan to offer a diverse range of solutions developed in Japan, a front runner of global challenges, to the rest of the world.
URL：http://www.sensyn-robotics.com