It is possible to automatically generate optimal flight routes for each tower to be inspected and to perform high-quality inspection work that does not rely on the proficiency level of the drone operation. In addition, it is possible to achieve overwhelming cost savings. This is done by providing an inspection process which automatically generates 3D models of the towers based on the data captured with automatic navigation and then automatically detects rust/corrosion with our unique algorithm. 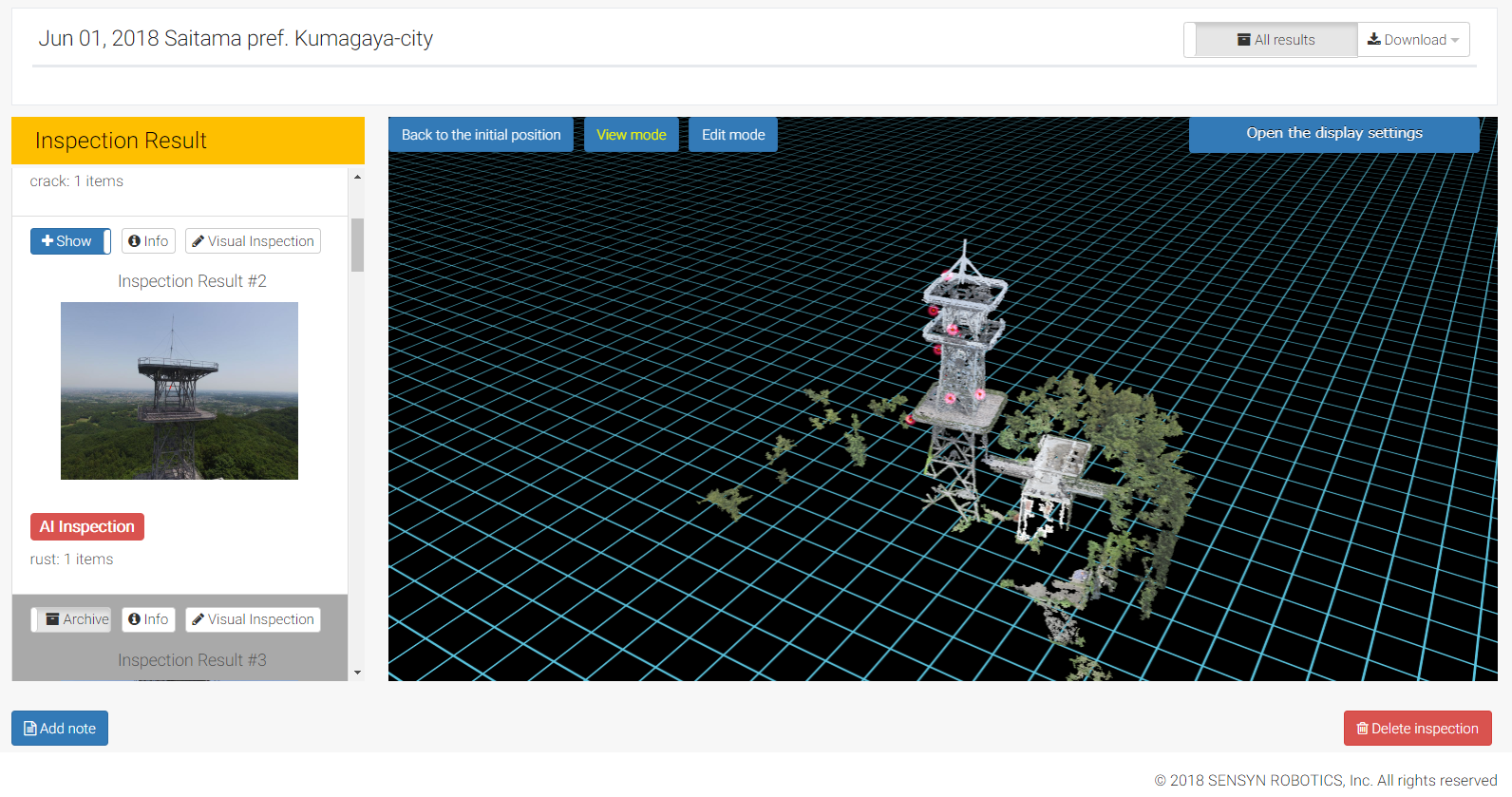 TOWER CHECK automatically prepares a 3D flight route with simple settings in two steps by utilizing GCS* that has parameters specialized for tower inspection work. This makes it possible capture in automatic navigation just with input in two steps (center point determination and tower information) in a wizard format for which complicated flight route setting work was required in the past by manually inputting parameters for 10 items more . The tower to be inspected is captured all over with the equipped cameras while the drone performs automatic navigation in line with the set route (patent pending). This realizes inspections with a high level of reproducibility without being affected by the competency of the worker.

GCS:   This is the abbreviation for ground control system. This is a system to automatically control drones from the ground.

TOWER CHECK automatically detects points where rust or corrosion have occurred by analyzing images captured with drones. Our unique engine that applies AI/Deep Learning perceives the characteristics of the rust or corrosion to extract the location where these have occurred. It is possible to perform inspections at the same level as proximity vision. This is achieved by confirming the images linked to 3D modeling against the abnormalities (e.g., looseness in bolts). The user can also perform this detection work.

The automatic detection results of rust/corrosion are managed in the cloud. They are then automatically plotted as points where abnormalities have occurred with 3D modeling to prepare a report. Even more detailed and effective reporting is possible by the user also combining this with the visual inspection results.

TOWER CHECK offers highly accurate rust and corrosion detection with our unique image analysis engine that applies AI/Deep Learning developed by the Research Institute of Systems Planning, Inc. (head office: Shibuya-ku, Tokyo / President: Hitoshi Kadowaki). The unique technology of ISP achieves the techniques of Deep Learning with small amounts of learned data despite the fact this normally requires large amounts of learned data. It can be started without waiting for the accumulation of data. This improves the performance of abnormality detection in short cycles according to the accumulation of inspection data.

We provide an automatic navigation setting course for towers using SENSYN FLIGHT CORE*1 as initial preparation. Our staff offers support when performing inspection work for the first time. The user will then perform this work from the second time onward.
*It is also possible to provide just the application to companies with the applicable drones.

*1: Automatic Drone Operation Platform: SENSYN FLIGHT CORE
This is an integrated platform that automates the work of customers. It consists of three systems – a ground control system, a work performance management system and a data linkage system. This makes it possible to easily achieve work automation with drones without the need for special knowledge or technologies.